If you are looking for an interesting vaporizer to play around with then there is one on the market that will keep you busy for a while. The Hydrology 9 vaporizer from Cloudious9 is one oddly functioning device.

This vaporizer sets itself apart from most of the conduction vaporizers on the market line by incorporating a water filtration system for vaping. It goes directly into the body of the unit, similar to a bong.

In addition to that, it also looks and to an extent acts like a lava lamp with its colorful lights. It’s hard to take a vaporizer seriously based on a description like that but rest assured, once you lay eyes on it for the first time, you will start taking it seriously.

END_OF_DOCUMENT_TOKEN_TO_BE_REPLACED

Entering a new era, Kandypen’s new Prism Plus has a drastic change in its new design. It has been awarded the ‘Best Overall Vape pen of 2017’ by the Vapeguide. The new design provides a sophisticated look that has a great feel to it. As it embarks in the new direction, it takes on the world with a bolder design.

The new addition to Kandypen’s family of infamous vape pens carries the milestone innovations previously achieved. There are no innovations in the prism plus. The compact design does bring us a great product that gives us a worthwhile experience.

END_OF_DOCUMENT_TOKEN_TO_BE_REPLACED

This vape pen entails a storm of features and an elegant design. The numerous intriguing features are an astonishing innovation that exceed the quality of this pen. The design is as daunting and mesmerizing as a night full of stars. Kandypen’s Gravity vape pen is the buzz of the town, it is truly an ecliptic pen that has reached the moon and beyond. This pen can only be used with wax and oils, herbs are an exception.

The clear tasteful vapors and sleek design make it one of the wax pens that have to be added to your collection. Kandypen reminds us why their pens are the standard that everyone else compares to.

It has yet again brought us the best seller vape pen that aims for sublime perfection. Gravity Vaporizers joins the ranks of greatness with its exceptional capabilities and astounding design. It was awarded the best vape pen of the year by ‘Vapecritics’.

END_OF_DOCUMENT_TOKEN_TO_BE_REPLACED

The Mighty vaporizer is a product from Storz and Bickel in Germany and is the big brother to the Crafty vaporizer. Storz and Bickel are also the producers of the Plenty and Volcano which are both use at home desktop types of vaporizers. If you are familiar with the Crafty then you will also be familiar with the Mighty since both of them came out at the same time, intended for different segments of the market. Basically the Mighty vaporizer draws the power of the Volcano and tries to add the portability of the Crafty together to create a sort of a hybrid that is more functional for some types of users and debatable for others.

END_OF_DOCUMENT_TOKEN_TO_BE_REPLACED

In the industry of vaporizers, Pax Labs managed to produce a dry herb and wax vaporizer now called the Pax 3. The original Pax and the Pax 2, which was widely recognized and hailed as the market leader by an overwhelming amount of people, were awesome! The easy to use functionality and the slim portable shape of these devices is favored by most users of tobacco and cannabis vaping consumers.

This year Pax Labs announced the uplifted version of its famous vaporizer, the Pax 3 Vaporizer. Along with an array of new features. Without any further ado, let’s see if the Pax 3 manages to live up to the reputation set by its former model. On with the review!

END_OF_DOCUMENT_TOKEN_TO_BE_REPLACED

I’m sorry to inform everyone who has loved the V2 Cigs reviews and e-cigarettes as they are no longer in business.

From what I heard the Juul company bought them out but also the FDA was constantly giving them unnecessary issues until they finally couldn’t keep going.

So be sure to now check out the e-cigarette Mig 21 Clear Fusion Vapor. They are using the same type of parts on their e-cigs as V2 customers did. This means all your current batteries and cartridges will be compatible with these Mig Cigs. Prices are just as good as V2 was and they have a huge variety of just about anything you will need. They even have a “make your own” juice bar!

Worth checking out the Mig Vapor Cigs here…

A good friend of mine has been getting electronic cigarettes since they first came out. He has gotten quite a few different brands (including; V2 Cigs, Green Smoke, White Cloud, Blu, South Beach Smoke, and Lucy). Luckily for me, he let me try them all before I purchased one for myself.

After testing them all out I first narrowed it down to my top three choices (White Cloud, Green Smoke, & the V2 E-Cigarette), and from there between price and features offered I decided to get the V2 electronic cigarette. So now here is my personal V2 Cigs Review.

END_OF_DOCUMENT_TOKEN_TO_BE_REPLACED

Kandypens launched the much-praised herbal vaporizer, Miva, over a year ago and it has sustained it’s adequate standard even today. The herbal vaporizer is an above-average addition from one of the top Vapor companies.

Kandypens has yet to fail in introducing us to a degenerative product, though Miva comes close. In its top ranks, Miva vaporizer has been poised to stand tall and bold. The Miva vaporizer comes with the infamous lifetime warranty that is accompanied by any Kandypens vaporizer.

Find Out Everything In This Kandypens Miva Review

END_OF_DOCUMENT_TOKEN_TO_BE_REPLACED

The G Pen Elite was released in 2016, it was an incredible vape pen for the time, probably among the best herbal vape pens at the time. However, as time changes so does the top tier. At the time of its release, the G Pen Elite managed to bring us a compact vape pen with a chic design and a pretty great performance. Grenco’s new addition truly stands out among the crowd. The sleek groovy design is that brings us an above-average vapors.

END_OF_DOCUMENT_TOKEN_TO_BE_REPLACED

Update!!!  As of November 2nd, V2 Cigs has gone out of business due to way too many issues with FDA regulations. However, there is a brand called Mig Vapor that is the next best thing when it comes to these particular e-cigarette vapor devices.

They have quality products that are even interchangeable with the V2 Cigs products! The Mig Vapor reviews are all 95% 5 stars, free shipping for orders over $75, and they even have a “make your own juice” bar! Definitely worth checking them out.

Most if not all current V2 customers are now visiting Mig Vapor especially since they are compatible with V2 Cigs electronic cigarettes.

The Vapor 2 Trinity by V2 Cigs

I hope you enjoy reading my Vapor 2 Trinity review.

Originally, I bought a vaporizer thinking it would help wean me off smoking altogether. It ended up doing the opposite. Towards the end, when I was smoking cigarettes, it felt more like a chore. There was really no more enjoyment in it (though when did I ever enjoy it). I had tried quitting cold turkey so many times before. All it would take was one major incident to stress me out, and I was back at the store for another pack.

I was finally lead to e cigarettes. Although after seeing a few people ending up on the news from their e cigarettes blowing up in their faces, decided it wasn’t worth the risk. Regular cigarettes are bad, but I never ended up in the hospital because of one. Seriously not big on medications either. I wouldn’t even consider the patch. So, I just put it in my mind that I was going to space out my cigarette breaks until eventually I didn’t feel the urge to smoke anymore. However long that would be. It Didn’t work.

END_OF_DOCUMENT_TOKEN_TO_BE_REPLACED

The Best Vaporizer in the World – Re-imagined!

This amazing portable vaporizer has arrived! Never before has one seen such a great product on the market! It comes complete with a longer battery life, a larger compartment for your products, a more balanced heat experience, and is even enjoyable to hold! It comes with an additional heating choice that is different from the original Pax.  It gives you an additional ten degrees on each side of the heating spectrum. This option for a wider spectrum of heat choices offers for more variation in your vaping experience. This is a different feature from most vaporizers!

END_OF_DOCUMENT_TOKEN_TO_BE_REPLACED

An Honest Review On The QuickDraw 500 Vaporizer

Various vape pens that are available today give individuals the freedom and choice to convert between material types. However, to this date, there has not been much when considering multi-functional portable and high-quality vaporizer options.

But the QuickDraw 500 is a portable option that acts as a dry herb, wax or oil vaporizer. Here is some information on this highly rated vaping pen.

END_OF_DOCUMENT_TOKEN_TO_BE_REPLACED

We are going to review the Wismec Reuleaux RX200 Box Mod, which has features such as a 200W wattage output, as well as 18650 batteries that are removable. In fact, it has three batteries. Not just that, but it has functions that control temperatures. With that said, continue to read on to learn more about this product, as well as the company behind it.

END_OF_DOCUMENT_TOKEN_TO_BE_REPLACED

You may be looking at the pictures above and wondering what the heck is this? We haven’t got into a whole other category of vaping much on this website yet but we decided to start reviewing tobacco alternative type related vaporizers now as well. Considering several people that help maintain ExtremeVaporizers.com use them currently and quit their tobacco cigarette habits switching to them we wanted to share some of the best of these types as well.

This new device is pretty advanced for the typical ‘just starting out’ vape user. However it can work just fine for even a beginner. For someone just curious about Vaping E Liquids that doesn’t want to spend extra money as a big investment I would not recommend this vape device. If you prefer a more simple design I would check out this Mig vapor vape pen kit.

END_OF_DOCUMENT_TOKEN_TO_BE_REPLACED

The sexiest portable vape on the market!

Enjoy reading our Vapir Prima Vaporizer Review! It fits into the palm of your hand!

In September of 2015  Vapir, world-renowned vaporizer manufacturer, Exploded onto the scene with the release of their latest portable vaporizer; The Vapir Prima. From its sleek brushed aluminum body to the simple stainless steel vapor path I’ve got to say it, this is one of the sexiest herbal vaporizers to hit the market.

Vapir stands behind the Prima with a 5-year warranty promising an herbal vaporizer that is going to stay with you for the long haul. Read below for a detailed look into what makes the Prima tick and what sets it apart from other portable vaporizers on the market today.

END_OF_DOCUMENT_TOKEN_TO_BE_REPLACED

50w of vape power in the palm of your hand!

A starter kit is an all-important purchase and one where you should be heavily contemplating all of the choices available in the market. There are many kits, which might appear to be good on the surface, but falter when they are used in person. It is essential to go over all of the details and make a well researched decision to ensure you purchase a starter kit that is going to be long lasting and provide the level of quality needed. One of the more recent starter kits to hit the market is the ‘Kanger Subox Mini‘. Let’s take a glance at the pros and cons of this product and if you should be contemplating making the purchase.
END_OF_DOCUMENT_TOKEN_TO_BE_REPLACED 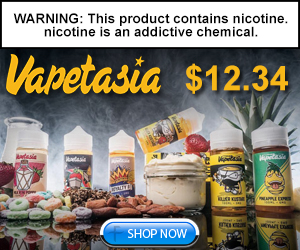